Assessing the role that chance may have played in fair tests

Because treatment comparisons cannot include everyone who has had or will have the condition being treated, it will never be possible definitively to find the ‘true differences’ between treatments. Instead, studies have to produce best guesses of what the true differences are likely to be.

The reliability of estimated differences will often be indicated by ‘Confidence Intervals’ (CI). These give the range within which the true differences are likely to lie. Most people will already be familiar with the concept of confidence intervals, even if not by that name. 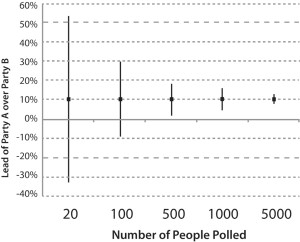 The 95% Confidence Interval (CI) for the difference between Party A and Party B narrows as the number of people polled increases (click to enlarge).

For example, in the run-up to an election, an opinion poll may report that Party A is 10 percentage points ahead of Party B; but the report will then often note that the difference between the parties could be as little as 5 points or as large as 15 points. This ‘confidence interval’ indicates that the true difference between the parties is likely to lie somewhere between 5 and 15 percentage points.

The larger the number of people polled, the less uncertainty there will be about the results, and therefore the narrower will be the confidence interval associated with the estimate of the difference.

Next: What does a “significant difference” between treatments mean?