Experience with screening for neuroblastoma – a rare cancer that mainly occurs in young children – is instructive in several ways.

This tumour affects nerve cells in various parts of the body. Survival rates for affected children depend on factors such as which part of the body is affected, how widely the tumour has spread when diagnosed, and the age of the child. The overall five-year survival rate of children aged one to four years at diagnosis is around 55%.[3]

A curious feature of neuroblastoma is that it is one of the few types of cancer that sometimes disappears completely without treatment – a phenomenon called spontaneous regression.[4]

Neuroblastoma was a tempting target for screening for four reasons: (1) children who are diagnosed before the age of one year are known to have a better outlook than those who are diagnosed later; (2) children with advanced disease fare much worse than those with early disease; (3) there is a simple and cheap screening test that can be carried out by blotting wet nappies and measuring substances in the urine; and (4) the test detects nine out of ten children with neuroblastoma.[5]

Mass screening of infants for neuroblastoma at six months of age was first introduced in Japan in 1985 without the benefit of unbiased (fair) evidence from clinical trials. During the first three years of nationwide screening over 337 infants were diagnosed, 97% of whom were alive in 1990 following treatment. But 20 years later there was no evidence that neuroblastoma screening had reduced the number of children dying from this cancer. How could that be?

The two studies demonstrate how neuroblastoma screening was not only worthless, but led to “over-diagnosis” and must have identified tumours that would have spontaneously regressed.

When the evidence on which screening had been introduced and promoted in Japan was scrutinized it turned out that there were serious flaws – but a ready explanation. The impressive 97% survival figure illustrates the effect of something known technically as ‘length-time bias’ – meaning that screening works best at picking up slowly developing conditions (slow-growing tumours in this case). By contrast, fast-growing tumours are less likely to be picked up by screening but will lead to clinical signs in the infant – for example, a swelling in the abdomen – which will rapidly be brought to a doctor’s attention. These fast growing tumours are potentially much more serious than slowgrowing ones. Slow-growing neuroblastomas usually have a good outcome, including spontaneous regression.[6]

So the 337 cases diagnosed by screening would mostly have had a good outcome anyway and would not have included infants with the worst potential outcomes. And of course screening would have picked up some neuroblastomas that would have disappeared naturally. Without screening no-one would ever have known that these tumours existed; with screening, this overdiagnosis turned the affected infants into patients, who then went on to be exposed to unnecessary harms associated with treatment. 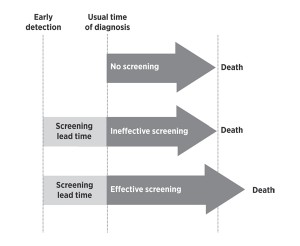 Living longer with a disease label (click to enlarge)

In addition, the encouraging results from small studies that had led to the nationwide screening in Japan had initially been analyzed by looking at length of survival from the date of diagnosis of neuroblastoma, not at length of survival from date of birth. This is important because diagnosing a disease earlier does not automatically make patients live longer – they merely live for a longer time with the disease ‘label’. Put another way, survival appears longer because the ‘disease clock’ starts earlier.

This is an example of another sort of bias known as ‘lead-time bias’ – and it can be overcome by analysing the results by date of birth instead of age at diagnosis.

By contrast, when unbiased evidence was obtained from clinical trials done in Canada and Germany, involving about three million children in all, researchers were unable to detect any benefit from screening, but there were obvious harms.[7] These included unjustified surgery and chemotherapy, both of which can have serious unwanted effects. In the light of this evidence, infant screening for neuroblastoma in Japan was stopped in 2004. Meanwhile the infants of New South Wales in Australia were largely spared from neuroblastoma screening, which had been planned in the 1980s after the encouraging early Japanese studies.

But the Japanese results, as mentioned above, showed longer survival from date of diagnosis for the screened infants; survival from date of birth had not been analyzed. So, an Australian specialist stepped in and re-analyzed the Japanese results from dates of birth of the infants rather than from dates of diagnosis – this analysis did not show any difference in the survival rates of the screened and unscreened infants. This convinced the New South Wales authorities to abandon their screening programme, thereby saving the infants from unnecessary harms and the health service from unnecessary expense.

Next: Weighing benefits and harms