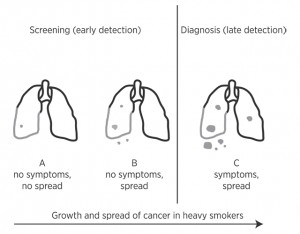 Growth and spread of lung cancer in heavy smokers (click to enlarge).

Screening may detect disease earlier, but not always early enoughto make a difference (see Figure). Some cancers, for example lung cancer, spread within the body before the patient has any symptoms and before any tests can detect the presence of the cancer. Attempts to detect lung cancer by the use of chest X-rays illustrate this problem (See stage B in Figure).

In the 1970s, several large studies in heavy smokers showed that, although the cancers were detected earlier, there was no evidence this led to a decrease in deaths from the disease. The lung cancers detected on the X-rays had already spread beyond the lungs. So, these patients lived longer with their cancer diagnosis and were treated earlier, but there was no evidence that it made any difference to their life expectancy.

More recently, a large randomized trial involving 53,000 current and former heavy smokers compared chest X-ray screening with screening by a special sort of computed tomography (CT) scan called a spiral CT. Both groups were assigned to three annual screening procedures. Spiral CT diagnosed lung cancers at an even earlier stage than did chest X-rays, and in a small proportion of patients this was sufficiently early (stage A in Figure) for treatment to be of benefit (346 deaths from lung cancer in the spiral CT group vs 425 in the chest X-ray group).

But this beneficial outcome came at the expense of a large proportion of people wrongly labelled with lung cancer. Overall, for every 1,000 heavy smokers who had three annual X-rays or scans, over eight years of follow-up, three fewer died of lung cancer. But 13 still died of lung cancer despite earlier detection, and 233 received a false-positive result that required further investigation. [19]

Download a PDF of Lung cancer screening: early but not early enough